She rounded the corner in time to see a young girl picking up a utility knife and feeding Dolly a slice of the cheese Lucy had bought earlier today. The girl had a trim, lean frame, and she couldn’t have been more than twelve or thirteen. She wore jeans, a worn Carolina sweatshirt, and scuffed tennis shoes. A red headband held back a wild spray of damp black curls that framed the girl’s light-mocha skin.

The girl fed more cheese to Dolly. “I’m Natasha. You must be Lucy.”

Dolly nudged the girl’s hand, giving her a forlorn look that only more cheese might fix. So much for being a guard dog.

“Don’t feed her any more cheese, or you’re going to clean up after her when she has an accident.”

“Yeah, ‘ew’ is right. I made that mistake once.” She set her flashlight down on the counter. “Natasha, how did you get into my home?”

“It’s not your cottage. It belongs to Mr. Jessup.”

“Mr. Jessup passed last summer. I’m next in line for it.”

The girl looked up with doe eyes full of a sorrow that had Lucy’s breath hitching in her throat. “I miss Mr. Jessup. He was my friend, and he always said I was welcome here.”

“My dad’s sleeping in a drunk tank, and my mother is dead.” Dolly nudged her hand, but Natasha kept the cheese for herself. “You know, everyone is talking about you in town.”

“Is there not any other news in this town other than me?”

Lucy took the knife from Natasha and opened the refrigerator. She pulled out bread, mustard, and luncheon meat. “Do you want a sandwich?”

The kid looked scrawny, and she had a scrappiness that kids living alone developed. “Can you get me a couple of plates?”

The kid went to the right cabinet as Lucy rinsed off the knife.

“You know this kitchen pretty well. Do you come here often?” Lucy asked.

“When I need to get away from home.”

She unwrapped the bread and set two slices on each plate. “Are you sure your father isn’t worried about you?”

“I wish. He won’t come looking for me for a couple of days.”

“Who’s your dad?” She’d just met this kid, it was the middle of the night in a raging storm, and she was asking the questions like their meeting was all routine.

“That makes you Natasha Willard. The family that lives a couple of miles from here.”

The girl settled on a stool by the counter. “Yes.”

“I know you know, but I thought a formal introduction might be nice before we eat.” She doled out two slices of luncheon meat, slathered mustard on the slices, and set the second slice of bread on top of each. She cut both sandwiches, and then, grabbing a fresh bag of chips, sprinkled a liberal amount on both plates.

“You want a soda out of the refrigerator?” Natasha asked.

“That would be nice. Thank you.”

The girl scooted off the seat and moved toward the refrigerator like she owned the place.

When the kid settled on her seat, Lucy pushed a plate toward her. She opened her own soda and took a long pull, wishing right now it was a cold beer. “So how long have you been staying at the house?”

“On and off for a couple of years.”

“How old are you, Natasha?”

“You ask that like I’m some kind of kid. I’m eighteen.”

“Okay, maybe twelve and a half.”

“I’m not judging. Just curious. It’s not often I drive over a thousand miles to move into a haunted house and find a kid in my kitchen in the middle of the night, eating cheese.” 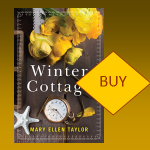