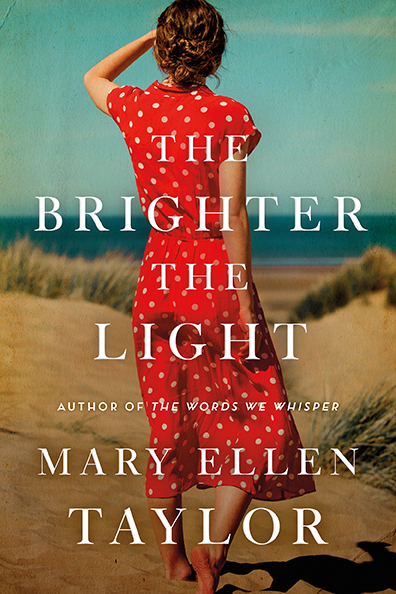 The Brighter the Light

When a shipwreck surfaces, old secrets are sure to follow.

Or so goes the lore in Ivy Neale’s hometown of Nags Head, North Carolina. When Ivy inherits her family’s beachfront cottage upon her grandmother’s death, she knows returning to Nags Head means facing the best friend and the boyfriend who betrayed her years ago.

But then a winter gale uncovers the shipwreck of local legend—and Ivy soon begins to stumble across more skeletons in the closet than just her own. Amid the cottage’s clutter are clues from her grandmother’s past at the enchanting seaside resort her family once owned. One fateful summer in 1950, the arrival of a dazzling singer shook the staff and guests alike—and not everyone made it to fall.

As Ivy contends with broken relationships and a burgeoning romance in the present, the past threatens to sweep her away. But as she uncovers the strength of her grandmother and the women

The Brighter the Light Excerpt

Off these shores, the Atlantic Ocean is greedy. She swallows ships, goods, men, and hungrily guards her treasures and mysteries. Days, months, centuries can pass without a whisper of truth, and then smooth waters crackle, briny depths churn, and somewhere deep below the surface, a grip slackens, and a secret is revealed.
Now, standing on the shore before dawn’s untethered sky, Ruth could feel the looming change in her eighty-four-year-old bones. She huddled deeper into her coat, warming her arthritic fingers as sunlight burst above pale clouds ferried along the horizon by cold, salty winds.

“No one saw the storm coming but us, Mama,” Ruth said to herself. “I felt it like you once could.” None of the news stations had forecast that depressions off the African coast would head west, mingle with the warm waters of the Caribbean, and snap free as a Cat 4 storm. No one had expected evacuations so late in the hurricane season. And no one had predicted the damage.
Ruth had wanted to ride out the storm, but the sheriff had ordered her out. She’d argued but, in the end, let him drive her over the Wright Memorial Bridge to the mainland, where she’d spent a long night in the Currituck County High School gym with hundreds of others. Worries over the damage swirled in the crowd as winds howled and lights flickered.
Funny thing was, Ruth hadn’t been worried. Annoyed, sure, but not anxious. She’d known before she’d left her cottage that her hotel, the Seaside Resort, wasn’t going to survive. Like her, it had run its course. Their time had passed.
Her family had owned and managed the Seaside Resort for nearly one hundred years. Her daddy liked to brag that he’d won it in a card game, but the place hadn’t been much until Mama had seen fit to marry him and take charge of him and the resort’s day-to-day operations. On this day in 1938, she was born in Bungalow 28, which once boasted the best ocean view in the entire place. As the story goes, her mama found Ruth wrapped in a pink blanket, and there’d been no sign of the woman who’d given birth to her.
Edna took her wailing discovery home to her husband, Jake, and the two decided after seventeen years of marriage that a baby would be just the thing for them. They folded the little girl into their lives and, together with the hotel, weathered all of Mother Nature’s punches.
A wave crashed against the shore, pushing water right up to the tips of Ruth’s worn athletic shoes.
She turned from the ocean and walked up the dune, past the sea oats that brushed her fingertips. Looking at the Seaside Resort’s remains still pained her. One-hundred-and-fifty-mile-an-hour gusts had torn up the trees and shrubs and dumped them in the pool, rippled the asphalt parking lot, and ripped off the roofs of the bungalow and main building. Gallons of rain had poured inside the structures.
On the other side of the dune, she moved toward what had been the main building. The carpet in the lobby, which she’d just installed two years ago, was soaked with rain. The seashell wallpaper was peeling off the walls in large strips, and sunlight streamed in through the cracked roof. The Seaside Resort might have had more lives than a cat, but she’d used up her last.
“I’ve taken the offer on the property, Mama.” The practicality of selling didn’t soothe her guilt or anger. “Pained me good to sign the papers yesterday. But there was no way clear this time.”
A breeze blew cold from the ocean, and she closed her eyes as she searched for signs her mother was listening. Of course, she didn’t hear anything. Like Ruth, Mama never was a woman of many words. No bear hugs or sloppy kisses. But steady as she goes and always there. And Mama could guard secrets as close as old Neptune himself.
“I’m not crazy enough to think they’ll save the hotel. Only a fool would try. Too expensive.” She’d saved what she could from the damaged buildings and stowed it in her cottage, packing each room nearly to the ceiling. Tossing away what she’d paid good money for seemed sinful. “What remains of the resort will be razed. But maybe that’s for the best. Time for something new.”
The money from the sale of five acres of prime beachfront property would clear out Ruth’s debts and leave her with enough to get her to the grave. There’d be no extra money for her granddaughter, Ivy, but Ruth’s cottage, built a century ago with timbers from a demolished church, would bring a tidy sum.
“Blessed by God,” her daddy used to say about the cottage. Considering it was two hundred yards from the Seaside Resort and hadn’t lost a shingle, she reckoned that was true.
Whatever the reason for the cottage’s endurance, Ruth saw it as a blessing. Ivy had a chance for a fresh start, whether she chose to live here or sell. No better gift Ruth could give.
Ruth turned her back on the ruins and faced the ocean. The brisk salt air burned her lungs and fisted around her heart as she moved across the sand. Wind brushed her face.
When she raised her gaze, she saw her parents standing on the beach holding hands with her daughter. She was tired and ready to join them. She’d be leaving Ivy alone, but that girl was the strongest of the lot. If anyone could heal the sins of the past, it was Ivy.

The Brighter the Light Reviews