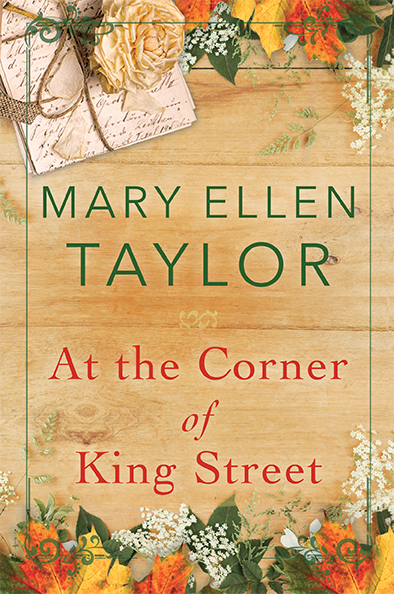 At the Corner of King Street

Adele “Addie” Morgan grew up in a house filled with pain and loss. Determined to live life on her own terms, Addie moves to the country and finds a job at a vineyard where she discovers stability, happiness, and—best of all—love with the kind owner, Scott.

But an unexpected call abruptly pulls Addie out of her new and improved life. Her sister has just given birth and Addie’s Aunt Grace wants her to return home to help the family—even if it means confronting things she’s tried so hard to forget.

When Addie arrives, she quickly realizes that she hasn’t truly let go of her former life, at least not completely. After making a surprising connection with her sister’s baby—and her sister’s ex-husband, Zeb—Addie must choose between her picture-perfect future with Scott and the family roots she thought she’d left behind for good…

At the Corner of King Street Excerpt

Minutes after two, the sun had reached the hottest part of the day, its harsh light heating the rolling green hills of the Shenandoah River Valley. I closed the doors to the tasting room, cutting off the morning’s cool and pleasant breeze. The air conditioner now hummed, the vents gently fluttering the muslin curtains. A wine bottle wind chime, hanging near a window, clinked. All morning, I’d been prepping for the launch party by setting up tables and chairs. The table linens were inspected and placed on each table. Table decorations—small wine casks with a bundle of white roses and grapevines in the center—would arrive Friday morning. Candles would be placed tomorrow, and the wine-cork name card holders would go out just before the event. With one table to dress, I stood back, savoring the order and organization. I invested energy and care into each place setting, hoping that by creating order on every eight foot round, I would somehow restored balance to the Universe tipped out of balance since Janet’s four calls. The phone had remained quiet since the initial burst of calls and, as much as I wanted to believe all was well, silence often came before disaster. I was in the eye of the storm. As I smoothed my palm over the last white table linen, an old truck rumbled up the main drive, its engine grinding and humming, as its tires crunched gravel. Gears shifted and groaned as the truck slowed. The old truck radio blared a country western song about wishes and moonshine. The song coaxed a smile. It must be Scott in one of the farm vehicles. Scott liked country western music. Though raised in an upper-middle-class home, he somehow fancied himself a good old country boy. Gentleman farmer described him best. I expected the sound of his booted feet thudding up the few steps to the porch, no doubt sprinkling clumps of dirt in their wake. Scott never had been good about the boots or cleaning up messes. Never. Scott worked harder than anyone else on the vineyard, so I couldn’t criticize. But he expected hard work and productivity ended with the desired result. Two plus two equaled four in his world. He’d never toiled toward a goal only to see it ripped out of his hands and destroyed. Since this morning and Janet’s call, I imagined Fate flipping a coin now flying high in the air, turning end over end. Soon, the coin would fall toward the ground losing side up. When I didn’t hear footsteps, I rose from the table. Suddenly, I pictured Janet standing outside the tasting room staring at the building, ready to charge inside. Heat rushed me as I opened the door and, shadowing my eyes from the high sun, I didn’t see a vineyard vehicle, but a red, rusted truck. The door opened and an old woman got out. Her thick graying hair was pinned back in a tight bun; deeply tanned, well-lined skin surrounded her eyes and her mouth. She wore an old sweatshirt, faded jeans and scuffed brown work boots. Crystal blue eyes snapped and bit as her gaze roamed. Not Janet. My Aunt Grace. My mother’s sister. The last time I’d seen her, I’d been packing up my car, my body still battered and bruised from the car accident. She’d asked me to stay. I’d refused. My walkie-talkie buzzed with Scott’s voice. “Addie, I’m headed up to the tasting room. Sorry, I’m late.” I plucked the walkie-talkie from my hip and pushed the red button, my gaze squarely on Grace. “Scott head up to our house. Grab a hot shower. I’m minutes behind you. There’s nothing else for you to do here.” “You sure? Thought you wanted me to check the layout.” “It can wait. I have a vendor onsite, and we’re gonna have to talk for a few minutes.” “Ten-four.” Shifting focus, I clipped the walkie-talkie to my hip and moved across the open veranda and down the steps. I approached Grace much like I would a stray dog. Grace had always been the strong one in our family. The summer I turned twelve and Janet turned fifteen, my mother needed to be hospitalized. Social services had contacted Grace and she’d agreed to take us. Aunt Grace was never a chatty woman or very maternal, but those three months were delightfully predictable. I hoped to stay forever but then Mom returned. Janet was thrilled as we sailed away from Grace’s safe harbor toward the choppy waters with Mom. “Grace.” Grace eyed me for long tense seconds. “You don’t answer your phone.” “Lots of work today. I turned it off.” She rested bent hands on narrow hips. She was fifteen or twenty pounds leaner since I’d seen her last. “You turned it off when Janet started calling.” “Yes.” Steel, I kept in close reserve, molded around my heart. “I suppose she’s in trouble again.” “You could say that.” I folded my arms over my chest, knowing I might not be cursed with madness, but I was indeed cursed with a sister who refused to release her grip on me. “What has she done this time?” “She’s in the Alexandria hospital.” No insurance likely. No money. What was the issue? Overdosed? Fallen? Another car accident? “Did she toss out her meds again? Is she psychotic?” Seven years separated Janet and me, but in a blink, all the old fears and anger rushed me. “She’s out of it pretty bad.” Grace approached, but neither of us made an effort to close the remaining feet between us and hug the other. “She also gave birth this morning. This time it’s a girl.” I sensed a shift in the earth under my feet and a wave of nausea pass over me. Another female in the clan. More madness. “A girl.”

. . . This morning, mere phone calls from Janet had stoked my imagination with a thousand disaster scenarios. Now that I had the actual news, the burden nearly made my knees buckle. I shifted, hoping maybe I could shake it off. But like a perching hawk, it clung with strong, sure talons. “Who’s the baby’s father?” The lines around Grace’s mouth, which some might have mistaken for laugh lines, deepened as she frowned. “I asked, but she’s too far out of it to know.” “What are the chances that she’ll ever know?” Grace held up her palms in surrender. “I’m not here to defend your sister or what she’s done.” “Why are you here?” “To ask you to come home.” “I am home.” Her frown deepened. “Home to Alexandria.”

At the Corner of King Street Reviews